A voice can do something that no other musical instrument seemingly can really do. By its very inflection combined with its wide-ranging tonality, Fay Victor can evoke emotional and attitudinal responses and mold an atmosphere that rings of an ever-changing context. Because she is aware of a spectrum of music to include Arnold Schoenberg, who is said arguably to have changed 20th century music for rest of time; and because she has inhabited Europe, specifically Amsterdam; and because she has, for many years, composed with her Netherlander husband, Jochem Van Dijk; and because she is a rare autodidact, when she sings, she is singing outside of her mature self. She is radiating into the world her passion, intelligence and a sensibility to the absurd.

The Fay Victor Ensemble, or FVE, has made a mark on the viability of the small musical group genre beginning with its first album, The Freesong Suite, released in 2009. (From Fay Victor's website: The Freesong Suite was the only all original vocal project to be voted the 2009 Village Voice Jazz Critic's Poll Best Jazz Vocal.) Suite is a beautifully consistent and fluid recording where Victor’s versatile voice establishes itself as a force as strong as the instruments which play along with her. Her group here is made up of truly solid musicians: Ken Filiano on bass; Anders Nilsson on electric guitar; and Michael “TA” Thompson on drums.  In Suite, Victor and Van Dijk have constructed a piece of music that bears the textures of a work larger than expected for a quartet to produce. The music reveals light and dark, the soft and hard, the busy and calm, the expressive and quiet within a complete framework where no interruptions, only transitions, occur. The musical instruments create the environment where Victor can float freely, understandably, interacting with this experimentally alive composition.

The same is true of the 2013 release, Absinthe & Vermouth. Clearly a toast to the turn of twentieth century Europe in the strangeness of lyric and sometimes in the phrasing of the music, this recording possesses an inimitable fascination with the variations of sounds and how well they work with or are contrary to the main verbal content.  The music comes from a trio: vocalist Victor, guitarist Nilsson and bassist Filiano. There is no drummer. 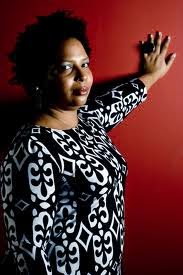 Aspects of rock are reflected in some of Nilsson’s guitar licks. Aspects of blues and jazz are heard in quick rhythmic components from all members of the trio. Aspects of classical are heard in Filiano’s virtuoso bass playing. Aspects of synthesized and live non-electronic music are interwoven into Nilsson’s sculpted electric guitar lines. And aspects of broadway-style and folk song stories come through the patently stellar vocalizations of Victor. Created is an album that is more than unique. It challenges the ear with its brashness and subtlety, coolness and fire.

Victor alone takes tone for a walk along a graph line of high pitches, painfully well-enunciated spoken words, dissonance that lurks in the shadows of Pierrot Lunaire, impulsive swooping crescendos and cabaret-like songs. Her lyrics are extraordinarily basic, clipped and unromantic.

Absinthe & Vermouth is just that: a mix of the bitter and the sweet in a well of contrasts that ensues in the dynamic that naturally emanates between opposites.