- May 11, 2011
Writing every day religiously is a pattern of existence that I have not established yet. When I do, the writing will come more easily and I won't have such angst about the process. It has been bad enough submitting my words to the people who write for a living to edit; or thinking anyway after the product is spewed out that I do a pretty good job.
When the subject matter of my words is general rather than zeroed in on a specific record or event, the writing is not so full of uncertainty. That is for the reason that no other person can question it.
But when I do write about recordings and concerts and people, even, then, I go on record with my statements and they are read by those who seek "veritas."
Back in 2004 or so, I had been practicing being a serious scribe about creative improvised music for several years. I had earned the label "critic" from those who did not write about the music I followed. I was looked upon as a vehicle for publicity by those who put on concerts & musicians who wanted me to pay attention to them. As the years went on and I kept writing, it was incumbent on me to let go of the pressure I felt to write anything about music otherwise I could not do it.
Writing an article is like giving birth. And when I am done with one, I feel relief for a day or two and celebrate and then have to think again about what is coming next. In that zone of thinking, I get a lot done. Now that it is spring, I can go outside and fiddle in the garden. I can actually walk a couple of miles like I used to every single day, instead of resorting to riding the stationery bike in the mudroom for fifteen or twenty minutes. I can clean the dust off the furniture that accumulates without my noticing until my thumb prints are visible on the trinkets that decorate the table tops or the light at a certain angle shows the bunnies as I walk by. Or, and this is the most pleasurable I think, I can go to town and walk up and down the main street window shopping. Dreaming.
What creates the angst in me is: Do I assess the music I am writing about in ways that will make sense to the reader? Or that the reader will believe? Do I hear everything? Or do I talk about it well enough that hearing every detail is unnecessary? See, the writing is supposed to point in a certain direction.
A few years ago, a well-known writer for a well-known online jazz website asked me a question about a record from Europe that he wanted to order, obviously worried that my supportive comments about the record could have been off the mark. My confidence about my words led me to urge him to buy the record. Not long afterwards, he emailed me to say that he had bought the record, listened and said that my observations about the music were "right on." Not only did this give me a pat on the back, but silently I absorbed this reassurance and said to myself: OK, Lyn, keep going.
And even earlier than the above instance, when my writing was infrequent, yet thoughtful, and the number of CDs that appeared in my mailbox did not amount to nearly what comes in now, the president of one of the longest operating creative improvised music recording companies emailed me to say that he truly believed that my reviews had gained "credibility."
The musicians reputed as great music-makers in the world of creative improvised music have never wavered in their belief in what I do. To receive accolades from these musicians gives me more incentive to continue than those I might receive from other jazz critics. I feel more a part of the world of the musicians than that of the jazz writers. Sometimes and sometimes not, in the jazz publication world, I feel like I have to fight to write and have the words be accepted.
Evolution occurs with the survival of the fittest. Last time I went to the doctor, he said I was doing great.
So, I say: OK, Lyn, keep going.
Video and text copyright 2011 Lyn Horton

Popular posts from this blog 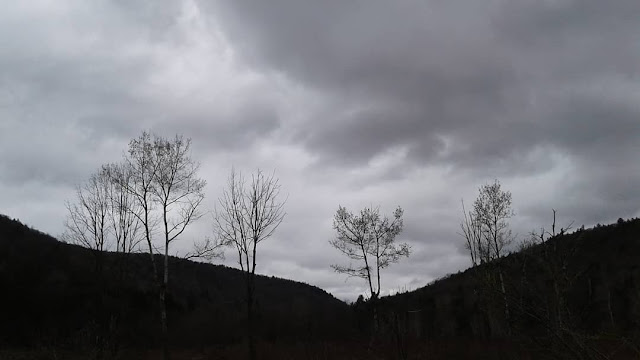 It was Easter Sunday. No family around to celebrate The rising of Christ from the dead.
No eggs planted anywhere. My breakfast French toast was dipped in eggs though, Drenched in syrup, where berries and cinnamon also floated.
The dishes were washed. The reading of the news was done. I was sufficiently terrorized, Thrust into hopelessness and gloom.
Some say we will survive. Others say nay. I have no reason to believe in anything but myself. So much trauma in my own life caused by those Who were meant to love me unconditionally. As parents, as lovers, as friends, as a husband.
I was alone. And intent on finding another place To merge with the natural world.
Down the state highway going south Is the entrance to a road that parallels The river I visit on Sundays. I have never been down this road. It was a good day to give it a try.
Discovering this path by the river For the first time on foot, I was eager To see where it took me. I parked where a closed gate blocked going any fu…
Read more

None of us can remember seeing our hands and feet for the first time. We began to unfold the layers of knowing, differentiating this from that. Extending our hands and feet had a purpose. The initial steps to communicating. Our interaction with the world became too complicated to let communication remain as single hand outlines painted on pitted dark cave walls. Language needed some kind of organizing principle in order to mean anything. Left to right. Right to left. Up and down. Down and up. Across. How to assemble symbols to declare, to instruct, to explain, to question, to exclaim, to simply say.
Somewhere in that evolution the grid appeared. Some say it is the way our brain is arranged. How to extend order to our internal and external cognitive environments.
Originally these grids were only dots and called “Ellipsis” as in dot dot dot. Dots then became lines. “Ellipsis” stayed. …
Read more

Artists live in a tight world of history and influence. The medium an artist uses often points to possible penchants for attractive pods of that network. How an artist assimilates those areas of interest is complicated and eventually translates into what the artist ends up doing in both apparent and undetectable ways.
Peter Pincus is a contemporary ceramic artist. He has in his own practice evolved a means to unite history and influence to create his signature vision. Although he speaks of ceramics as being “too material specific to be classified as fine art,” he has produced an array of objects that walk a fine line of defying that statement.
As a teacher, husband and father, he and his wife have bonded to establish a vibrant working environment. Their studio is organized and stocked plentifully with materials exemplified by shelf after shelf after shelf of color-infused liquid slip clay. Twenty hours of studio time per week unfolds not o…
Read more