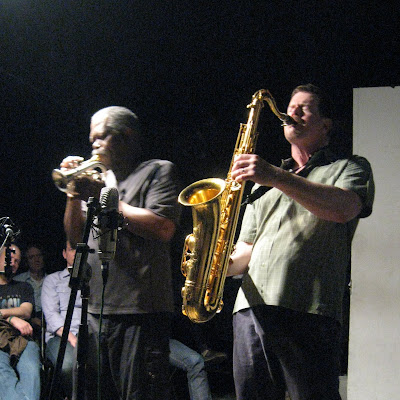 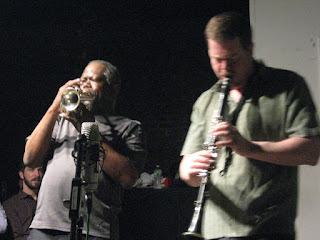 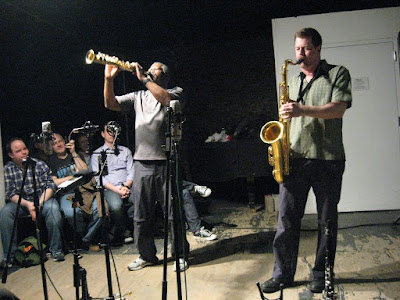 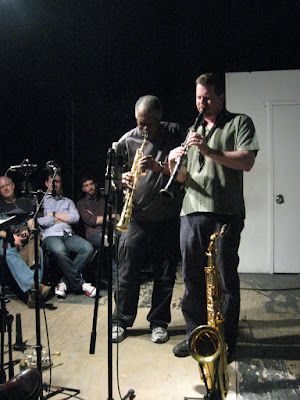 Matthew Shipp Trio: The Art of the Improviser Live 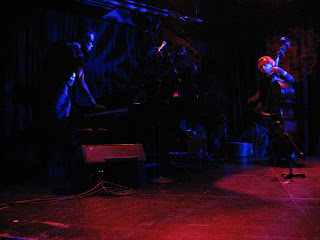 I have been writing about improvised music for close to fifteen years. A few times, I have made mistakes in technical language or citing the wrong composer's name for a standard. Even though it gives me a minor headache that these errors passed me by before I let go of the articles to be published, I realize that, in the long run, these mistakes are no big deal and they do not override the content of the writing-only put a scratch in it that can usually be rubbed out by an editor or by a vigilant musician.

I trust myself to open my ears fully to take in the music well enough to describe my feelings on how I hear. I am nervous though every time my fingers hit the computer keyboard to start this process, because, to paraphrase Anne Lamott, you have to rid yourself of all distractions by stashing them metaphorically in jars so that the mind can calm down.

Within the last few weeks, I have been to several concerts. A couple of years ago, I decided that it was tedious to take notes at concerts and then review them, under time constraints that put me on edge. Honestly, I just wanted to enjoy the music.

But, on March 7, 2011, in New York City at (Le) Poisson Rouge, the Matthew Shipp Trio played in celebration of Shipp's new release, a double CD called The Art of the Improviser, on the Thirsty Ear label. This concert was so good that I was compelled to write about it.

The gig sang out its singularity; it was incomparable to any other concert I attended recently, where the groups' numbers ranged from one person to seven or more. The trio simply works so consistently and tightly that its impact as one organism defies criticism and invites only praises. And for an improvising group to have formed a web that is so closely knit is indeed rare and notable; in fact, kind of remarkable. 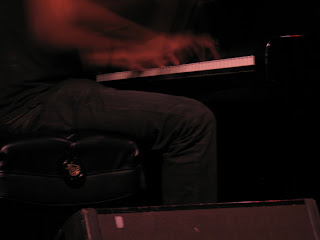 Shipp is indubitably the leader. He strikes the match that initially lights the fire. The pianist forges ahead in a state of consciousness that is apart from any that, collectively, we can know. Bassist Bisio and drummer Dickey board this plane of burning energy with equally as much fervor, supplying Shipp with the support he has earned and deserves.

Shipp has acclimated himself to chordal structures; yet, those structures find new definition, new positioning between more rhythmically nuanced and less intense, subtly arranged, phrasings. Those phrasings become the breathing room for the blasts that follow, whether in renderings of a jazz standard or gospel tune, towards which Shipp leans, or of a childhood song like Frere Jacques, which he once described as a "means to get out his frustration by pounding" the keyboard with double-handed chords.

An inappropriate word to describe Shipp's music is abstract. He has developed his own musical language and logic, which bows substantially to the history of piano-playing, but is not exclusively riveted to that history. The music rallies around his spirituality as it paradoxically merges with his intelligence, itself invested in the awareness of the stars, planets, intergalactic gases or dust and the unfathomable mystery of the way in which totality and beyond works. His music is a means of demonstrating that he just does not care about everyday drudgery and would rather be breathing fresh air than standing in a subway car. His music operates as poetry; the shifting in and out of formalized repeated resonance to lullaby is intentional. That he has been touched by a Yogic master is Shipp's gift to his audience. 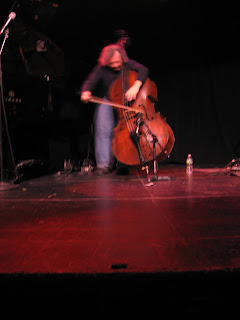 The bold broadness with which Bisio performs, either using pizzicato or arco technique, clearly shows his passion for his instrument and the music he plays with it. As he looks up with his eyes closed and his lips un-pursed, his facial expressions tell of a deep sensitivity to weaving his sound throughout the large picture painted by Shipp and Dickey. When he solos, he wills himself as a one-man orchestra. It isn't the separate notes he hits that matter; it is how he connects from pizzed pitch to gliss to bowing. The imaginable throbbing of the vibrations that surround him resembles how force fields can exude from any radiant form.

Bisio has an amazing sense of rhythm that does not wane for a second as he progresses in a tuneless mode of stroking the strings. Often he stomps his right foot - a manifestation of an inner pulse wanting to free itself from his body as well as from his instrument.


His neck at a measurable angle from the static trunk of his body, Whit Dickey produces a steady stream of restrained percussiveness from his drumset that nearly becomes the axis around which the trio rotates; his drumming acts almost as a drone. His arms could not possibly flail uncontrollably because of the way in which the sound comes off the cymbals more than from the skins of his drums. 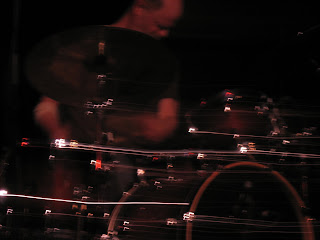 Yet, when he solos, he lets go of the restraint that penetrates playing with the trio and his arms dance more and the sticks go higher into the space above him and they descend onto the drums more often. The sound is clean and strong. His sitting position remains the same. Dickey does not lack momentum; he is total momentum, inexorably so. With that momentum, the trio is buoyed in streams that ripple into rivers and oceans that rock with swelling waves.

At this gig, Shipp listened as Bisio and Dickey soloed. With his arms and elbows on the edge of the piano above the keys, Shipp's listening pose was stunning. His pause provided as much music as his playing would have. Shipp did not play a solo; his interaction with the band was his solo.

As Shipp's music has evolved so his capacity to create a distinctive statement has increased. But his maturity has always existed because his motive to make music never disappeared. Critics fuss and fume about his verbal overstatements and liken him to every pianist they recognize within his playing, but Shipp is only Shipp. Just like Kandinsky is always Kandinsky. Believe it and believe in the inspirational embrace which their art imparts. 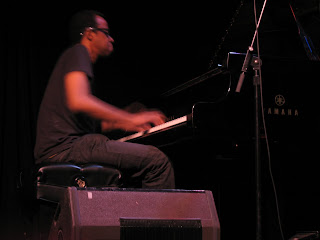