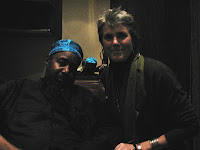 I remember you fondly, David S.Ware. And with compassion.
And the cognizance of your ardent desire and unrelenting determination to make a difference. 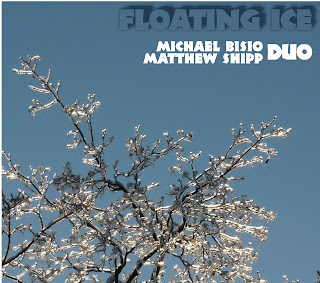 No one can ever speculate on the process of improvised music before it happens. It just begins given the proper conditions, space and time. As does any phenomenon in this universe begin or actually simply continue. That is the reason that it is no surprise that bassist Michael Bisio and pianist Matthew Shipp can move forward together without competing: ego-less, unfettered, yet married to their sound.

In Floating Ice, the two musicians step outside of logical boundaries except perhaps when Shipp catches some rhythms in "Swing Laser" or strikes up strange melodic figures in "Disc" like a child might wonder about the frequent bursting glow of fireflies in the night. Bisio never really follows the exact flow of the stream as much as converses with it in pizzicato whispers, even as he grabs at his bass strings. When he goes down his own path, he fingers the bass strings purposefully and has serious, furious, rapid strokes to bow. Shipp pounds the keyboard with wide open chords or trickles through the sound screen with cantankerous repetitious two-handed phrasing, conclusive mid-range or treble tremolos and seemingly endless scalar runs arrested by shifts in tempo or contrasting distinct methods of touch. A unique camaraderie yields one of the most interesting rhythm alliances of the entire recording in the conclusion of "Holographic Rag."

This is a dialog that leaves behind the memory of cooperative interchanges, allowing for one musician or the other to make clear statements that bridge to the next notes or to the next silence. From abstraction to unquestionable lyricism to styles that are familiar but rendered in a contemporary fashion, this duo has created a recording in Floating Ice which skews the normal.  Among resonant bass chords and wavy sounding board tweaking on the piano integrated with intensely driven scraping of the bow across, or slapping of, the bass strings, the steady heavy holds paradoxically planted in “Supernova” and “Decay” project an idea of dimensionless-ness: where interaction with the instruments produces no physical result and captures the mere evanescence of time.

Not long ago, Willard Jenkins emailed me regarding doing an interview for his series on women "jazz writers." The questions he asks the participants are always the same.

This is the product of that interview. 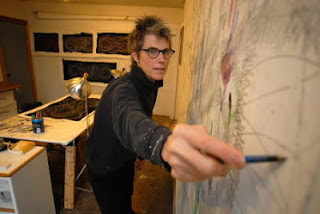