As Seen on ARTEIDOLIA: Article on Nick Cave Artist 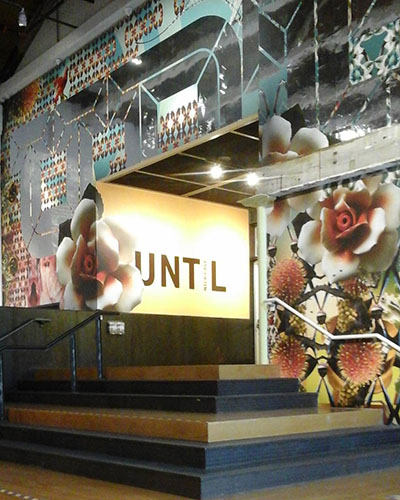 Nick Cave Takes More than Seven Steps to Heaven in "Until"

Nick Cave’s spectacular installation, Until, at MassMoCA in North Adams, MA, closed on Labor Day of 2017. That day was the last day to see it. Experience it, ingest it later to digest it and incorporate it into one’s soul. The fallacy of attempting to do so in only a day prevails when one is struck by its awesome presence. No one just catches “the Cave.”

Being with Cave’s work for days on end is the only means to grasp its intensity, roll around in its embrace, recognize and hopefully comprehend its message. Its message in the title of it, Until, strikes a prepositional chord of the “in between-ness” which all its parts suggest. The parts are so dynamic beyond their appearance that their object nature is transcended. It is the artist’s intention with this never-ending agglomeration of statements, confined only by the walls of the museum building, to establish constant metaphorical motion, constant mental engagement in questioning, wondering, coming to conclusions, dashing the conclusions, while remaining in a state of astonishment.

The content of the entire exhibit took three years to make. The pieces within the installation’s entirety use so much physical material that the weight of it and the contrasting uplifting character of it are immediately felt. To absorb the information that begins to unfold as the percipient walks through the doors of the football-field-size exhibit hall is a test of stamina and attention to the overall environment as well as to the detail within it. 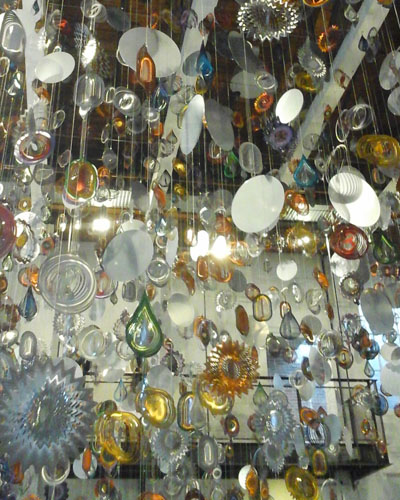 First, one is met by what could be designated several ways, as rain, as twinkling stars, as strings of mirrors, as Christmas decorations. The colors of the hundreds of metallic spinners, rotating in a sporadic yet uniform twirling motion, fall from the ceiling, which really feels more like the sky. For a child, the forest of spinners must seem immense; for an adult, the same, but not as immense.

The circular or tear drop shaped spinners, even though repeated in striated form and spaced equally along the lines that suspend them, are stories within themselves when studied. Despite their beauty, they are portraits of violence, explosions, and whirl winds of terror. En masse, their movement depicts pirouettes being done by hundreds of metal miniature dancers. The hazily reflecting solid circular shaped discs remind the viewers that they are a part of that which has been presented. Reflective tiles are also laid out on the floors beneath the spinners. To stand on these tiles means seeing oneself. Audience inclusion is integrated into every aspect of the journey.

A pathway winds through this fantastical world and eventually ends underneath a cloud of the best examples of Empire crystal chandeliers. They visually support the centerpiece of the installation which is a construction of Heaven, suspended from the ceiling, reachable on each of four sides by fifteen-step staircases on wheels. The rest of the cloud visible from the floor is filled in with pendulant vertical crystals, creating a delicate, misty and total surrounding. One can detect hints of what is growing upwards from the clouds by standing and looking up before one mounts a staircase. 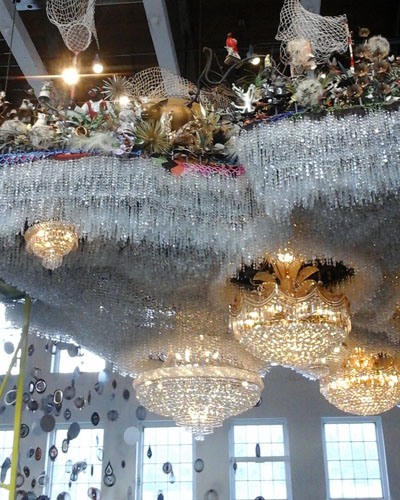 A multi-colored web of beads seems to hold the array of the constituents of heaven. Hundreds of lawn ornaments, including and most prominently, lawn jockeys, are arranged across the beaded–web box spring that supports them. Flowers with mirrored centers, birds, fruits, snakes, frogs, fake dandelion blooms, an alligator, cornucopia- shaped Victrola speaker horns and dream catchers, formed like the speakers and butterfly nets, are interwoven in this dense display of elements. That these frozen solid motionless elements are juxtaposed magnifies the intensity of the meaning of their coexistence, not only up there in a metaphorical heaven but also in a real world down below.

To photograph that which is atop the clouds is to record only a memory of their visual impact. Up there is the core meaning of Until. The viewer’s inclusion in the above-the-cloud space renders him or her part of the communication of the nature of racism. The speakers shaped like megaphones are broadcasting the inaudible sound of the persistence of racism’s existence. Hear me! Hear how false racism is! shout the lawn jockeys, cheerfully black-faced, guarding manufactured nature. Just as everything collected and arranged here represents an assemblage of the ‘real fake,’ so is suggested that the practice of racism is false and, therefore, taken further, intolerable.

The dominating question raised by Cave…‘Is there racism in heaven?’… is unanswerable here on earth. In this landscape, Cave has structured the question as he structured the sky, rain, clouds, the mountains and the trees in his own artistic language. The question is answered through one’s actions, the evocation of one’s passion to bring light to the darkness of a societal disease that penetrates the world, and is not only exacerbated and made proximate by the inexcusable actions that take place in America.

Beyond Heaven on the cement pool of the huge gallery floor continues a mountain range, made of beaded webbing, strung to the height of the loft that is the partial second floor of the space. On the face of the mountains are beaded in graffiti-like formations, a peace sign, a rainbow and multiple signs whose origins are positively ethnic. 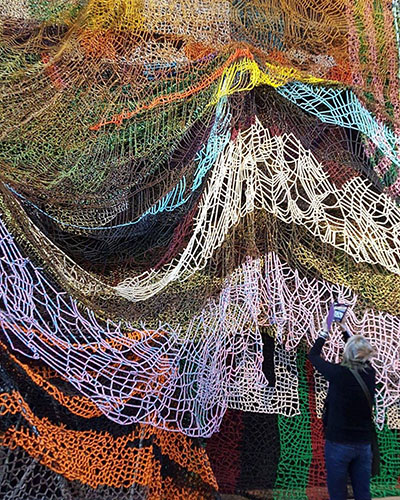 In a smaller room, whose entrance opens up beside the mountains, to a hall plastered with a repeated yellow, black and red image, is shown a video based on the idea of escaping the stereotype of the black man.

A cookie cutter version of a black-face man is stuck in a container in the center of the room midst raffia, unable to get out, slammed against the glass, prevented from coming alive.

In a stroboscopic projection on the four walls of the room, the figure becomes alive. The film motion loops more in patterns than literal depiction of the figure. Its turning point is the visible struggle for Cave’s eye to reach an eyehole of a costume mask to peer out. When he reaches the opening, he is looking at you. This image will remain with you forever.

Upstairs from that small gallery, a second floor houses a huge wall of fans blowing glittering Soundsuit material. When the viewer stands back far enough, the word “FLOW” can be discerned. The relation of this piece with the remaining work that establishes the whole of Until renders the prepositional aspect of “until” active. In other words, where one action could stop “until” another action could occur, the idea of the “flow” of one action into another supersedes a cause and effect succession of actions. The fans blow away the stopping of reaction. Flow is unstoppable conceptually. Flow blows right over the five blocks of an incomplete picket fence that stands before it on the floor. Nor does flow stop the bird that unpredictably flew through a window on the last day of the installation at the museum; flow invites that occurrence.  The window hangs on the wall as one exits to go back down stairs. 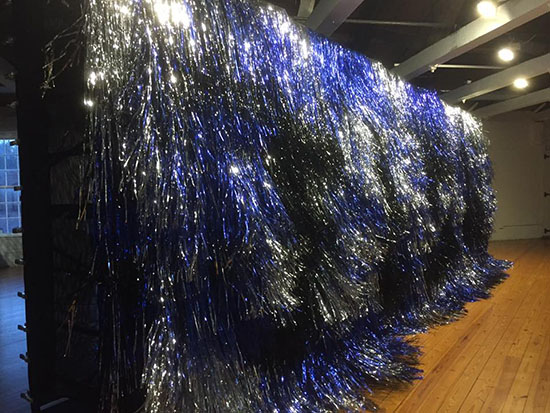 The ultimate calling for this exhibit for Cave was the collaboration that was required to build it and bring attention to it. Throughout its nearly yearlong stay at MassMoCa, Cave invited dancers, writers, poets and musicians to respond and periodically perform in their own way to his own art.

The last performance was “The Culminating Performance.” It happened three days before the exhibit ended. Those attending sat under the clouds.

Poets recited their telling words and vocalists sang their glorious gospel-like songs. Cave formally closed the event by donning a specially designed Soundsuit. (Cave is the inventor of the “Soundsuit,” a costume worn by dancers or performers, and placed in sculptures.) As is every Soundsuit, this one was constructed of more than several parts, each made of specially-picked materials. Each part was given by Cave’s designer and partner, Bob Faust, to those in the audience without whom the exhibit would have not been possible. Each of those persons was gestured by Mr. Faust to clothe the artist, one part at a time. Cave sat, erect, directed away from the audience, on a yellow chair in front of the choir, vocalists, drummer and organist, ready to receive the parts of the Soundsuit, to be dressed for a final formal good-bye.

Once the Soundsuit completely covered Nick Cave, he rose. The suit was heavy. But his heart, mind and body were strong. He danced, for he is a dancer; he bowed to and held the hands of each person whom he wanted to thank, then skipped away past the beaded mountains and disappeared.

Although deeply emotional and tearful, the ceremony was joyous. For Nick Cave had sent his message. He had opened hearts and minds to the beauty of humanity, despite its inherently drastic imperfections.

Art is powerful enough to surmount stark, divisive differences, you know. And Nick Cave proved it. 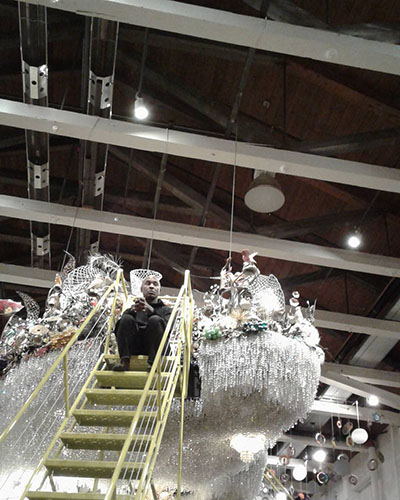 all images courtesy of Lyn Horton