In a trio collaboration with Jacob Wick on trumpet, Marc Riordan on piano and Frank Rosaly on drums, Tres Hongos demonstrates that improvised music from musicians,  born within the last four decades, recalls as much from the past as it projects innovation and awareness of the present. The youthfulness of the musicians gives the music its rawness, its edge, its angularity, its penchant for sound examination as opposed to grandiloquent, lilting lyricism, for instance.
The inexorable amount of detailed expression that documents the energy that goes into maintaining restraint gives the music its edge. It is no mystery that muscle and breathing control are components of managing the non-explosive retention within the playing.  No time is wasted to clarify that the trio is going to pull back and articulate no further than the tremolos or choruses that Wick repeats on his brass instrument or the notes Riordan plays mechanistically on the piano keys or the snare rolls, snaps, and cymbal hisses that Rosaly sculpts in the most high-tempo moments on the album. Volume is permitted, as in “Champagne Bayside;” but that does not mean that the overall sound steps out of the boundaries that were set from the very beginning.
This music is linked to the classical compositions of the last fifty years that includes that of John Cage, Morton Feldman, George Crumb and the Minimalists. Nonetheless, what is taken out of that music is naturally incorporated into a new process that allows the flow to happen rather than be irrevocably metered out.
The trio exhibits a sense of the passage of discrete units of time which intensifies the fact that no resonance contributes to the ongoing sonic unwinding. “God’s Girlfriend” is a prime example of the players’ complete introversion: trumpeter Wick plays his mouthpiece; Riordan interjects measurable silence between short chords or briefly rolled phrases; Rosaly barely touches the cymbal or the snare and any potential for ringing is damped and transformed quickly as he moves from place to place within the percussion spectrum.
The cover photo is called “Mojave Desert, California (Bottle of Piss)” from a series by Chicago photographer, Greg Stimac. That the members of the trio believe that this picture is simply a “strong stand-alone image” and lends no particular meaning to the music that is played on Tres Hongos testifies to the same kind of  provocative character in the title: for the “bad” translation of the spanish ‘Tres Hongos’ is 'Three Fungi.’
If there is any meaning to be had, though, the subtitle speaks the loudest of all: ‘Where My Dreams Go to Die.’ The evanescence of dreams is similar to the evanescence of improvised music. Neither a dream nor the music ever dies; neither can be replicated and once experienced simply becomes a part of the omnipresent universe.
Track listing: Game Urge; God's Girlfriend; Champagne Bayside; Optimist; Franklin as Night.
Issued on: PromNight, Molk Records, 2012
copyright 2012 Lyn Horton
- February 24, 2012 No comments: 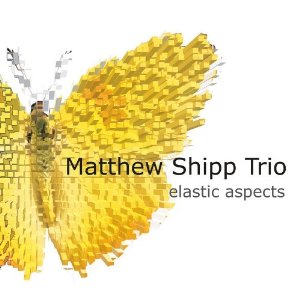 No matter whether he plays solo or with his trio, in his recordings, Matthew Shipp appropriates a signature design that includes introduction, evolution, climax, denouement and conclusion. The quality of the music in each recording never shifts; its character does. His fourth recording with his trio, this group including Michael Bisio on bass and Whit Dickey on drums, Elastic Aspects demonstrates clarity of motion that goes unquestionably forward but never deviates from an intensity, even in its quiet moments, that denotes universal embrace.
This story is prefaced with a slow-tempo arco bass line layered over amplified, distorted drumming and piano. Shipp’s mid-range chords, which he exits with single treble notes, follow; and then, after a breath, the guts roll out. Bassist Bisio picks out a sturdy rhythm; drummer Dickey coincides with light cymbal to snare combinations; and the piano persistently relates thematic ostinatos. It is as if Shipp opens the gates for everyone to walk through. The tracks each have titles, but that fact matters only for reference, because the music unwinds effortlessly from one place to the next without a hitch.
A mixture of abstraction interspersed with formal, heavy and subsequently boppish melody melts off Shipp’s sure fingers; he forms stunning improvisations that climb, curve round or spread out like the limbs of a tree to their creatively alogical end. Even when he goes under the hood of the piano, as in “Stage 10,” his determination is measurable; his purpose is audible in the clipped –off resonance. In fact, hearing his technique on the sounding board juxtaposed with his keyboard work is educational. It arouses awareness to the intersections of his pedaling with his fingering. Shipp is concerned with the broadness of his reach and the details within. How he manipulates them both preaches to the bass and the drums their role in communicating his overarching message.
Shipp hands a large portion of the development of this music to Bisio, whose weighty, resilient arco solos, particularly in “Rainforest,” are exceptional. Bisio plays into his instrument; he is not tall so his gravity is centered where he places his bow on the strings. The sound he produces is bound in rhythm and unrelenting in expression to exhibit sensitivity to change and range. When he works within the group, his pizzicatos are strong, relaxed and thoroughly united with music’s direction.
Dickey dictates his own boundaries. He steers towards rendering the sound that much fuller: the cymbal hissing and the snare skin shaking signify his presence. His playing becomes a means to stretch the musical line as opposed to being hell-bent on “keeping the beat.”
Continually achieving recognition and praise in the world for his musicianship, Matthew Shipp always succeeds in doing what he is meant to do: which is to make new music and lay aside all the superfluous nonsense that flutters around him.
copyright 2012 Lyn Horton