Billy Bang at His Best 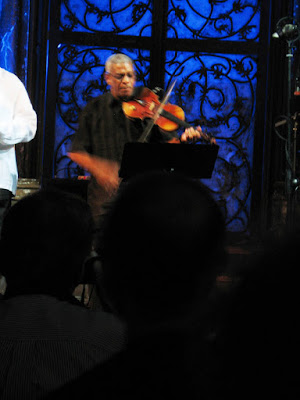 Speaking of This Earth
Mr. Billy Bang knows nothing but reverence to his violin, the music he makes with it and the inspiration behind the music. He takes nothing for granted. He is in love with his life and how it means to be alive. The inherent quality of these characteristics were expressed intensely, energetically and with determination when tiny Mr. Bang stood with his violin as a larger than life soloist on a moderately-sized stage in a moderately-sized hall, packed with dedicated listeners. At UMass Amherst, last Wednesday night, October 19.
Bang‘s music flows from his bow as it meets the strings. Obviously. But, it is how the bow meets the strings that makes the difference. It is the attack that makes the difference. His mastery of the attack pervades his musical statements, whether they are meant for him alone or are orchestrations of solos from his pieces for group. It is the attack that creates the signature for how the music is shaped. It is bad form for me to write about style. But Bang has a style that rings solid and true. It is honest and consistent and allows for continuity that rarely sees a break. The breaks come in the form of whole beat rests in a place in which they are planned, or the split second before he lands the bow on the strings and clarifies the end of one phrase and begins the next. The continuous-ness of the music is the telltale sign that the music is Bang’s and his alone.
Bang places atmosphere and energy and patterning into his playing, which combined is entirely distinctive. It is all about the story. If he could speak his story, it would be as continuous as the music. For when he speaks, his words fall out of him like the music, like water...like a river. The cadence of the music, that is occasionally overtly rhythmic, can be anticipated. This is different from being predictable. Bang’s cadence drives the music, impels its constancy, through repeated stroking methods, as they are lengthened and shortened, and shift from key to key, from consonance to dissonance, then shaped to be close and warm & intimate. The Bang Cadence.
Sure, he has serious statements to make and you know when he makes them because his bow digs into the strings, the pitches become stringent, his body wraps itself around his violin. Yes. He is so adamant and directed that he contorts himself around the box of the instrument to hold the strings below where the neck and the body of the violin meet and squeezes and twists the strings with the bow …. And when he repeats glissandos so that he lifts himself off the stage or pulls the bow down the strings so fast and hard, one, two, three, four times so that he bounces up and down on his toes --- it is then you want to weep.
It was not until the last number that Bang used a pizzicato: high and dry. And typically non-reverberant. But that is an aside. What Bang had done is sing from the mournful to the marching to the joyous. There was no mistaking any of his intentions. The “thereness” of Bang is unmistakable.
Like a whirlwind that stays in one section of the stage and radiates light as he spins into another zone, Bang solidly claims his position as incomparable musician. Fearlessly, speaking his mind.
Copyright 2005 Lyn Horton
Originally published at Jazzreview.com
- April 12, 2011 No comments: