On June 12, 2010, The International Festival of Arts and Ideas in New Haven, CT, began its eighteen-day long series of events. One of the first was a lecture by Jock Reynolds, the Director of the Yale University Art Gallery, on the work of Sol Lewitt, specifically focusing on the 25 year retrospective of Lewitt's Wall Drawings at MASSMoCA in North Adams, MA.

Aside from urging members of the audience to go to MASSMoCA to experience the three-floor installation of one hundred and five drawings spanning Lewitt's art-making life within 1969-2007, the year he died, Reynolds focused on the installation process. The process for every wall drawing is extremely basic, simple and systematized though arduous and detailed-oriented. For
each drawing, there are few elements. How these elements are combined creates a finite number of possibilities. Sometimes the drawings have plans instead of instructions. The placement of every drawing is determined by the drawings in close proximity and always in relation to the architecture.

One example that Reynolds concentrated on to illuminate the idea of Lewitt's own act of conceiving was Wall Drawing #260. This drawing is done with oil crayon on a painted wall; primary blue happened to be chosen for this installation. There are twenty different components, made up of straight lines, broken lines, arcs, not- 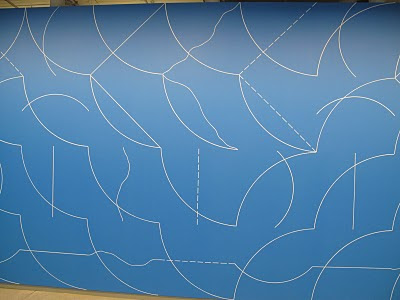 straight lines. One hundred sixty combinations of those components create the wall drawing. The components vary according to their position within a square, e.g. a straight ruled line is positioned horizontally on center, vertically on center, or diagonally from each corner, left to right, right to left.

This drawing is as basic as the Periodic Table of Elements. It is quintessential. It addresses the elemental in creation. That it is so pure allows seeing it in imaginative ways. As Reynolds talked about this drawing, he described it as "lines dancing across the wall surface." And they are. The square by square layout of the combinations disappear and the eye can travel up and down, back and forth, across and around without constriction. The eye engages in an improvisational viewing process. Strange, unpredictable arrangements of the wall surface are demarcated by the placement of the lines.

But more significantly, the drawing uses repetition as a means to express that everything really is different in time-space even though it may look the same; the drawing shows change within specific parameters. One cannot appreciate it unless all preconceived notions of the structure of art are put aside. Then, realizing that the best art houses very simple statements that release the mind from complexity takes a step in the direction of totally surrendering to its impact. The act of looking becomes a process of absorbing and becoming mesmerized. Entranced. One with the art.

Later on that evening, a production of Lucinda Childs' "Dance" took place at the Shubert Theater. It is a collaboration among Childs, Lewitt and Philip Glass that originally was created in 1979. The piece spans sixty minutes; three parts each last twenty. Reynolds' words about Wall Drawing #260 revivified the "Dance" performance extensively by connecting the act of drawing with the act of the dance as accompanied by the music. Three separate art forms merged, evoking a spirituality that transcended tangible dimensions.

Seeing this work now, forty years later not only reinforces its sheer elegance, but also presents a picture of the texture of this type of art at its peak, when it was not yet beginning to lose its freshness in relation to its invention. The concept of maximizing slight moderation had evolved out of minimalism in response to Abstract Expressionism and all the gunk associated with painting with the exception of Jackson Pollock, who threw the act of improvisational painting into the public eye. Pollock was more of a conceptual artist than people realize. Rothko, similarly so, but at the opposite imagery pole. Ironically what followed Conceptual Art was an equally gunky era in the 1980s which aspired to self-involvement, self-importance, the bigness of big, the most sensational of sensational, money and the marketplace. Only a few artists represented the latter. But their activity gave permission to anyone to do art and call whatever they did art and this was not based on Duchamp's contributions to art's evolution. It was about the glut of artists who were coming on the scene and making a living off bunches of eclectic, derivative emptiness. The soul of art evaporated.

There is more soul in the spareness of the work of Lewitt, Childs and Glass at this point in time than one would expect. That soul was shared by many artists who came after 1979. But somehow, I missed them. I was trained in the era of purity of expression. My soul is deep, my compassion endless. My art is infinite.