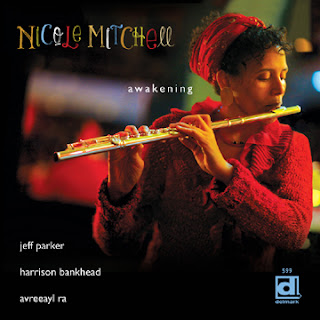 Touted as the country’s best ‘jazz’ flutist, Nicole Mitchell has really got it going on. In Awakening, she collaborates with her group to give a sprightly, endlessly energetic and sensitive take on her own compositions. She works with Chicago musicians: guitarist Jeff Parker, bassist Harrison Bankhead and drummer Avreeayl Ra.

Mitchell believes in melody, harking back to traditional forms, but she also wants improvisation to infuse her music with freshness. That fact reveals her playfulness and interest in molding mood.

Her fellow players hook right up to her lines. Parker not only strums, but also launches himself into solos that are not foreign appendages to the whole unit’s exploration. He never explodes on his electric guitar; he moves around mellifluously between pizzicatos and chords, a soft, thorough and utter complement to Mitchell’s metallic struts, leaps, flutters, and voice-like 'brrrrrrs' and sirenic 'oooohs.'

Bankhead is a model bassist, holding onto and maximizing harmony with Mitchell's strikingly melodic sequences of high-pitched tones. In fact, the harmonic spaces between the flute, guitar and bass are perfectly poised. After a non-scattered intro, “Journey on a Thread” seems to exemplify the most exploratory of the tracks, highlighted with Bankhead’s popping the strings on his bass in a lengthy well-grounded solo.

“More Than I Can Say” features Parker playing a carefully plotted pizzicato that sets the tide for this slow tempo Latin-inspired piece. Mitchell spins the sound of the flute in the background and Ra interjects rolls on the toms with a persistent cymbal sibilance. Mitchell eventually takes the tune, laden with romanticism, supported in part by the way in which Ra teases the way for Parker’s re-emergence.  Once Parker resumes his fingered line, one can imagine Mitchell listening, off to the side clutching her flute in her arms like a baby until she and Parker come together at the end for the close.


Nicole Mitchell married Calvin Gannt in July of 2011. She left Chicago for Long Beach, California. On her September 1, 2011, Facebook page, she wrote this note:

Dear Chicago,
You will always be my home! You've been so generous, so loving, and even kicked my butt when I needed it! I've been squeezed by the heat, the passion and the storms into who I am. You'll always be at my core. I loved being invisible, swallowed up by the crowds full of dreams like myself, and I loved submerging into the sounds of hope and determination that makes Chicago cutting edge. The Iron and concrete, the spirit lake of serenity and aqua blue meditations. The parks and most of all the beautiful people. I've been called away to California. I'm looking forward to more growth and more challenges with my new life. But I hope to always be present and rooted in some way to you, Chi.
Love Nicole

In the title cut of her album, "Awakening," which also concludes the disc, it seems that she projects a feeling through her playing that she is eventually going to broadcast that she will leave her hometown; for at the end of a soft, moderately paced, sometimes melancholy flute song, the flute's sound simply drifts away in a descending slur.


Track listing: Curly Top; Journey on a Thread; Center of the Earth; Snowflakes; Momentum; More Than I Can Say; There; F.O.C.; Awakening.
- September 02, 2011