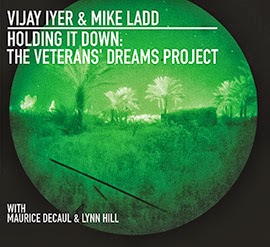 The third collaboration between composer/pianist, Vijay Iyer, and poet/electronics artist, Mike Ladd, Holding It Down: The Veterans’ Dream Project, intensifies its subject matter so much so that the music and words seize the heart and haunt the mind with stark and irrevocable truths.

Originally commissioned and premiered at the Harlem Stage in New York, this provocative work took four years to produce. Two veterans, USMC writer, Maurice Decaul, and USAF service woman, Lynn Hill, contributed directly to the performance of the piece speaking their own words.  Decaul and Hill also linked Ladd and Patricia McGregor (Director of the Harlem Stage) to other veterans of multiple ethnic backgrounds, who had been in Iraq and Afghanistan, to be interviewed on the basis of their post-war experiences, specifically with a focus on their dreams and memories, which evolved into expressions of anguish, solitude, fear and hope. Iyer has said that this musical work allowed “the space” for veterans to be heard, that they not be “rendered” or painted through their words, but play an active role in the “building” of the musical piece.

This work is not easily ingested. The descriptions put forth conjure up horrific images and plaguing concepts which are poignantly complemented with the music. Iyer composed sixteen of the seventeen pieces of Holding It Down. Vocalist Pamela Z composed the last.

Distinguishing itself from hip-hop, rap, opera, or songspeil, Holding It Down is diversely and consciously shaped. Ladd’s voice and poetry begins the recording: its raspy, near whisper corals an overall evocation of compassion and longing to fix things so war is not the answer to conflict. The contrast among Ladd’s voice and that of Decaul, Hill and Pamela Z moves the music into various emotive zones and positions the listening from shifting gender perspectives.

The change from acoustic to electronic instrumentation and the brilliantly smooth integration of the two does nothing more than emphasize the contemporaniety of the subject at hand. The formal piano opening with cello line establishes a pattern where quiet or disquieting melodies grow into the grip of seriousness by means of gradual crescendos or solid rhythmical tensions that dance with eclecticism and repeated percussive or synthesized punctuation. The music often offers a kind of substantial relief in the paradoxically uplifting nature of the sound surrounding the poetry. At no time, does the music override the significance of the words.

The emotional thoroughness of Holding It Down translates to how each poem triggers an unpredictable response whose intensity is measurable at the conclusion of the recording. The closing “Mess Hall” acts retrospectively in relation to preceding parts, using the metaphor of steel cafeteria trays functioning as the building blocks for a bridge away from war, to the place called Home.

Holding It Down testifies to the manner in which art can literally speak volumes about geo-politics, the horrors of human behavior, the breadth of human consciousness and the depth of instinctual human spirit.  This recording is praiseworthy, beyond the scope of the critical accolade, to be placed in a category all its own: an exquisitely cut diamond that has unquenchable fire.