Novo Veritas, My Son and I 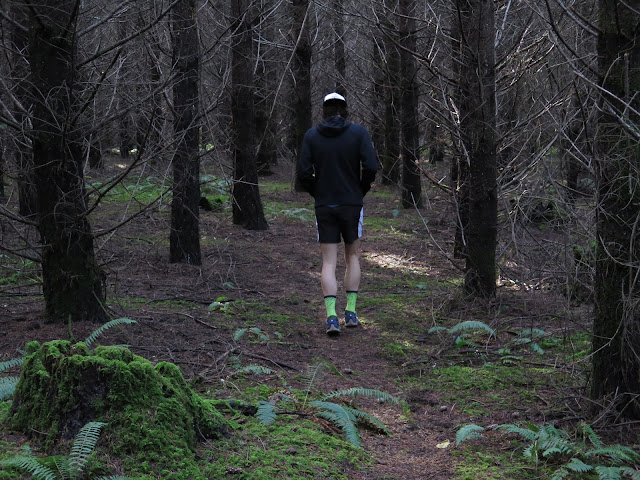 For the first week of November of 2016, I took a trip to Oregon to be with my son. It had been six years since I had seen him. During that time he had confronted his troubles as an alcoholic, about which I never knew a thing until he told me.

When I first encountered him at the airport, he was standing tall and alive, thankfully beardless, and handsome. I perceived him as only a Mother can view her son. All Mothers who understand that perception know that no words can describe the bond. It is strong; the love that is intertwined with lack of condition and overcomes darkness, the blight of past friction and opens into the light of infinitude.

That week our plans were to go with the flow of how any event would evolve and I relished every moment.

That week also happened to be one of the most active periods to date for his business, Novo Veritas.  He and his business partner, Betsy Hartley, were scheduled to give two presentations and appear on a radio show, with host, Mike Parker, the sports commentator for the Oregon State Beaver Sports Teams.

Both presentations showed the passion that both Spence and Betsy share about their own efforts to transcend the difficulties which have invaded their lives and about which they have developed heightened awareness that becomes keener day by day. The parallels which the two have drawn between the ramifications of alcoholism and of Type 2 diabetes respectively address hurdles that many have to jump in order to arrive at a place for fulfilling their lives.

This means choosing, making decisions, turning hard corners in order to uncover a healthy existence whose potential already exists, but which can blossom given incentive and support.

The groups in which Spence and Betsy talked were strikingly different.

The first presentation I witnessed was held in a small running apparel shop in Corvallis. The audience seated itself casually in a circle facing the two speakers. The situation was intimate. But the exchange between Spence, Betsy and several women in the audience proved powerful. One very delicate, fragile, small woman, who appeared to be weary of her stress, asked one question and then followed up with more. She was seeking guidance to move out of the place in which she seemed to be stuck. She shared only a general picture of herself. Both Spence and Betsy reassured her that moving forward hurts only after the initial steps and the continuation of healing oneself, finding that healthy and peaceful place is a matter of time, effort and will. 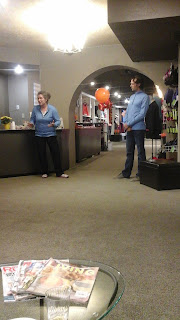 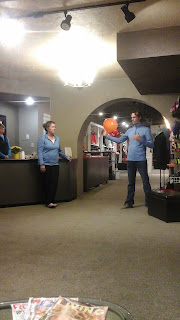 Another woman, who, as Betsy was and is, dealing with a weight problem, had just finished her first 5K running race, spoke up with confidence and belief in herself, aware still that she was in her "process" of reaching her goal...a testament to the coaching that Spence and Betsy can and do give individuals. The age of the audience varied but was within the range between thirty and fifty. The only man attending was a trainer with whom Spence and Betsy have both worked; he also contributed some positive ideas.

The concluding words to the audience were: We are here to tell our stories to help you tell yours. This sentence is a deep trigger: it makes me think. 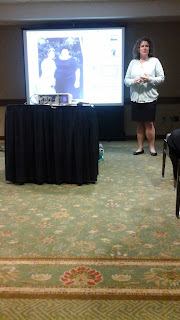 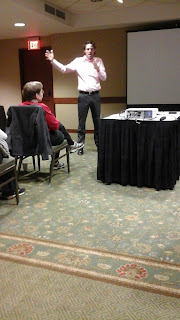 The second presentation was held at The Portland Athletic Club in a far more formal setting. The athletic club is an establishment where members inherit memberships. So the audience was a mix of upper-crust attendees with you-and-me-kinda-people. Spence and Betsy were conscious of their appearance for this particular date, knowing that their message, no matter how essential, might go over well if their appearance blended into expectations of the environment. As an introduction, they showed their video, which is always a tear-jerker for me. Then they each went into more detail with their stories in a more audience specific version. Their primary interest is to create a conversation between them and the audience members. So they request questions, as unfettered and unbounded as possible because listening is a means to shape the next steps for growth. One question that I remember distinctly came from an elderly woman, who looks to be in shape and is really beautiful. The question was this: what if life has been good and one simply wants to determine who he or she is? That Spence and Betsy lay themselves open to these amazingly deep inquiries tests the strength of their beings, for often, the questions they are asked pertain to the kinds of questions they continually ask themselves, both individually and together of each other.


Running is the vehicle for Spencer's and Betsy's recovery from their individual statuses. Running implements their sense of self to develop their strengths, contemplate their weaknesses, hone in on their essential nature. This does not mean that their encouragement is directed towards running only for any of their clients or groups, like athletic teams, with whom they work. It means that they both have a starting point for unleashing their experiences. Spence and Betsy can be key to the raising of one's consciousness. 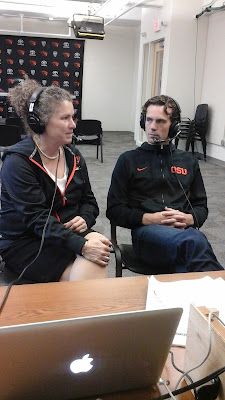 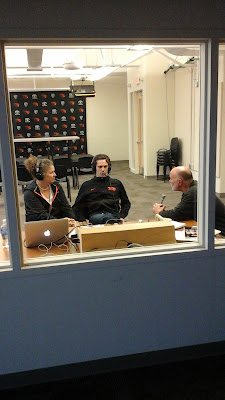 Mike Parker, a recovering alcoholic himself, interviewed the two (Nov 3, beginning at 75:00) on The Joe Beaver Show midweek. Mike was thoroughly interested and serious about the effectiveness of Novo Veritas. His questions hit upon aspects of Spence's and Betsy's stories which evoked emotion and demonstrated their willingness to help people and do good. A lot of good.  Mike asked them about where they have been, what they are doing and where they want to go. No sensationalism was involved. Just the facts. It was great.

Most of the time during the week, Spence and I just did stuff. One day we drove to Eugene so that I could replace my dead running shoes with new ones. Sure beat ordering them on the Internet! The hands-on service was terrific. Everyone in the running world knows Spence. He can talk to anyone about anything.

Driving with Spence involved a certain amount of silence because he thinks a lot. Our talking together acquires a special context because we live so far away from each other. Our lives are diverse, but seem similar in our mutual capacity for focus, accomplishment and fulfillment. We also share kindred emotions and personal psychologies: depression and anxiety. Communication about the latter jumps into our talking threads occasionally.

Toward the end of my trip, we spent an entire afternoon working on a trail he is carving out for himself in one of the many forests which pervade the rich vegetative environment where he lives. As we looked back on our work, Spence said: Hey, we must have gone a quarter of a mile! He dug and I widened and softened the paths; I moved fallen tree parts to act as guides for the direction of the trail. We stopped working at the crest of a hill where we could see mountains. Well, mountains are everywhere in Oregon. Not a strange event! And then we walked calmly back to the car, refreshed, revived, and glowing from our convention with nature. 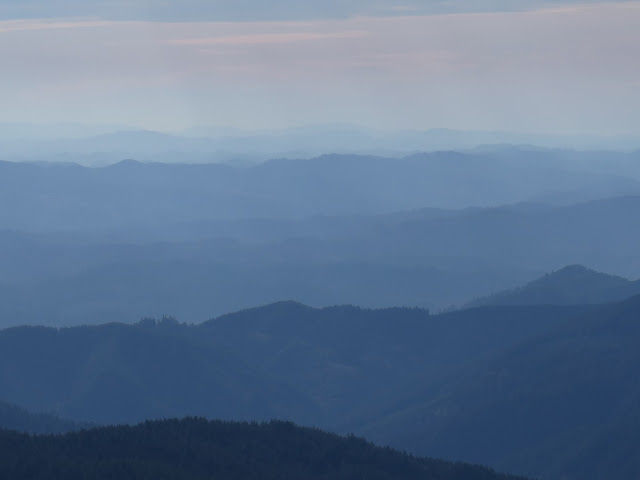 On another day we traveled to a peak from which could be seen The Sisters in Bend looking east across the state and Mount Jefferson. The wind whipped around us as we walked to the top of the mountain on a less used trail. At the top, satellite dishes and lights  spoiled the atmosphere but are, in this day and age, necessary. The peak was barren. My heart was full. The view reminded me of the landscape that lay outside my studio window at CalArts in Valencia, CA.  I had traced the contours of the mountains on the window glass to make a mock drawing of what would influence the subject of the rest of my art-making life. 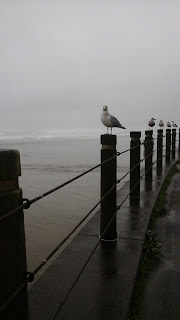 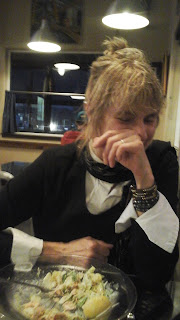 At the end of the week, we went to dinner on the nearby coast. It was raining cats and dogs. We floated on our journey as if we were on a boat. It was crazy to have come to the beach when the rain dropped in sheets and my raincoat billowed in the wind. But, hey, I took some pictures to document the fact that I had reached the Pacific Ocean. Dinner was lovely and quiet and full of joy. At no time did I ever think as a Mother that I would be having dinner with my mature thirty-seven year old son in a restaurant by the ocean to which he had driven me for a belated sixty-sixth birthday celebration. Age means nothing. We both know we are still growing up.


The Part Called the Ending

Telling this story touches on the reasons I have such immense pride in how Spence has stepped into the hole that is his disease and is climbing out of it to re-create the positive path that is his life.

Every photograph I took of him or of the landscape mirrors his history. Every word he uttered informed me of all the remarkable places he has been in his mind and body and all the unimaginable, unknowable destinations he will choose to travel to for himself.

My son stands out boldly against the bright clouded slate blue Oregon sky. He meets, as do I, uncertainty every day. Every day, however, with unanswered questions swimming around in his mind, he does not relent in pursuit of the next question. He leaves the questions he has remaining unanswered until the necessity for questions and answers disappear into the folds of what he has named the 'process' of living. His life will be long. 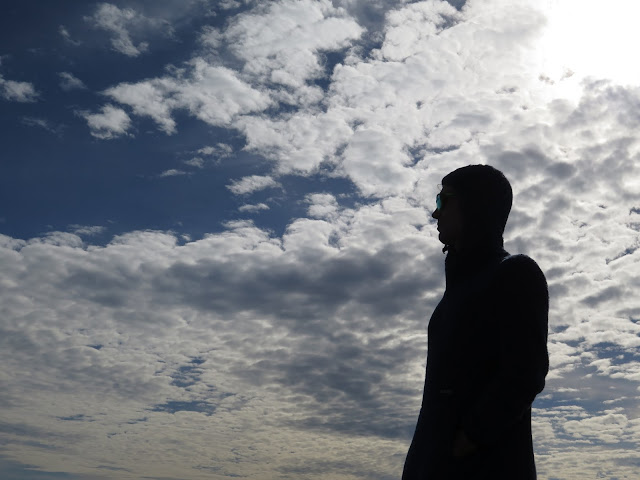