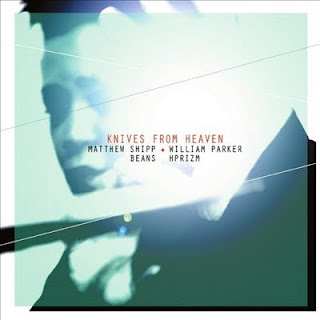 At the opening of Knives From Heaven, a condensed, high-pitched, seemingly helium-laced, voice announces “Matthew Shipp,” which is followed by an obviously sped-up version of pianist Shipp’s playing the introductory chords of one of his own pieces. An electronic blip is heard and it is more than evident that this album is about sampling and repetition over acoustic improvisation. Then comes the rap, “Half-Amazed,” unfurled by Beans. And there is no going back.
It is always interesting to note that Shipp and William Parker, whose bass playing audibly comes out of the pervasive sound in “Deadpan Stare,” become involved with projects that are ultimately only about electronics when they, themselves, are totally consumed with creative improvised music.
The music on Knives From Heaven conveys a hip-hop message. Hip-hop has evolved as the new classic popular music. That Shipp and Parker produce sounds engaging enough to Hprizm to incorporate into a highly rhythmic spectrum, which includes ample beat-boxing, compliments the musicians’ open-mindedness in permitting this application of their music.  Sometimes, Shipp’s piano playing, without any adjustment, imitates a digital rendition of itself.  So, in this way, it makes sense that Shipp would decide to dip into an electronic field. The same goes for Parker, who can turn on to and create any rhythmic statement on the planet.
But more than that, a platform for hip-hop that has class in the quality of its sound production is worth pursuing. This album’s intensity does not go over the top; the raps are straightforward; and the music is intelligent, simply being switched off at the end of its forty-three minute run.
- June 20, 2011