New York in June
Among the multitude of musical events in New York City at the beginning of the summer was the three-concert Festival of New Trumpet Music (FONT). The second of these concerts was held at (Le) Poisson Rouge, a rock/jazz club located on Bleecker Street in Greenwich Village. The performance was by trumpeter Wadada Leo Smith's Golden Quartet. In its inception, Golden Quartet was comprised of Smith, pianist Anthony Davis, bassist Malachi Favors Magoustous, and drummer Jack DeJohnette.  But within the past year, the quartet has included Angelica Sanchez on piano, John Lindberg on bass and Pheeroan Aklaff on drums. Sanchez is the newest member of the group. Lindberg and Aklaff have been working with Smith for years.
Of Golden Quartet, Smith says:

Golden Quartet is an ensemble of master composers / performers, whose experimental practice utilizes the quartet form, which is the purest foundation of musical expression in jazz /creative music and western music culture. As multi-instrumentalists they are concerned with a practice and research that involves an array of complex systemic forms, where the musical languages of compositional / improvisational / ankhrasmation are merged seamlessly in their interactive development in the quartet and are manifested in the performance dimension as a single music language. Golden Quartet’s music is fiery, explosive, and surges with a positive improvised energy force that’s constructed with polycentric melodic / sonic / rhythm units. The ensemble’s textural and structural materials reveal a musical terrain that is creatively rich and architecturally clear in form.

The descriptive intentions for Golden Quartet also summarize the entrails of Smith's music. He is aware of and practices the rudiments and subtleties of composition transforming in and out of improvisation. He brings his music to the group, of which he considers himself a part, and then the group collectively reflects the music back on itself, attending to the nature of quality, the ultimate musical conversation and the most intense self-examination during the actual performance. This is a demanding enterprise for musicians, but the result produces crystalline music that is unequaled anywhere.
On June 5, 2011, Golden Quartet performed five parts of Ten Freedom Summers, a work that is comprised of three multi-part collections of "compositions/improvisations." This NYC performance was made possible by Chamber Music America's "Presenting Jazz" Program and the Doris Duke Charitable Foundation. The performance of the entire composition will take three nights, scheduled in October, 2011, at REDCAT Theater in Los Angeles.
Smith describes his piece more specifically:

Defining moments in the History of the United States of America, Ten Freedom Summers is a large work inspired by the activity of the civil rights movement from 1948, when President Harry S.Truman signs the Executive Order 9981 to Dr. Martin Luther Kings' Memphis speech in 1968.

Ten Freedom Summers is composed for Golden Quartet and Southwest Chamber Music, an ensemble of nine performers.  Over the years I thought that I would compose a tribute to the civil rights movement, centered in the activities of three decades 1948-1968, much in the same way that August Wilson's plays comment on ten decades of the African-American experience in America, but through musical composition/improvisation.


Despite technical problems and friction between the guest performers and the management, the impact of the music reached far beyond what was no doubt expected. Smith's performance ethic transcends any troubles. He is serious and steadfast, proceeding with a course of action that shall not be thwarted in any way, shape, or form. His behavior transfers to his group members. They are faithful to his direction, graced with the compassion that puts all doubt and uncertainty to rest.
Smith was a beacon from which everything flowed. Not only did the traditional notated score guide his players, but Smith did as well, signaling with both his instrument, his body and his hand from what point, from what instrument and for how long any one section could begin and end. He pointed with his index finger to communicate an instruction for the music to change; he swiveled his entire body as he played the horn to coral the entire band. He was controlling and letting go of the music at the same time. There was as much group involvement as there were solos, duets and trios. Smith stepped out several times and allowed his music to flow as he listened. The ensemble's diligence applied to playing was palpable; its tenacity fully engaged. 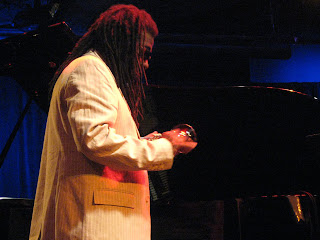 Smith opened and closed the doors for improvisation within the music. That is the beauty of how he shapes it. He  imparts to the music his sense of how other musicians can learn new methods of expression; in fact, that is factored into Smith's compositions. As a result, what the trumpet announced thematically or improvisationally, the remaining players absorbed and elaborated on through what they themselves chose to do in response. If the choices of the individual musician did not exactly fit within Smith's notions of how the motion should be going, he would let the musicians know, similarly to the way a conductor leads an orchestra. Smith projected his desires for the ensemble's dynamic gently, succinctly and with a confidence that transmitted his character, which is respectful and peaceful, but totally involved with the presence of the present.
Smith's words about Golden Quartet say it all. Nothing can be added except the sound of the music itself. The energy that came across during performance was inescapable and so was the mood and the feeling that reached out to uphold the original impetus for the musical statements. In these five parts of Ten Freedom Summers, the textures that were created defied disintegration. The tension that held the music together was perfectly defined and there was not one iota of extremism that could burst the music apart. The group crafted an intricately woven web of nuance, breath and strength of doing. The trumpet sang songs that elicited grandeur, melancholy, but no defeat. This music told stories, as certainly the entire multi-section work will do. Every phrase, every melody, every bit of cacaphony or set of harmonies will be analogous to reading each word, each sentence, each chapter of an epic book about African-American experience, to which Smith has and will continue to contribute.
The players in Smith's quartet each possessed their own space.  As they claimed it individually though, so their responsibility grew. They were beholden to render the music that Smith had given them to play as a once in a lifetime occurrence. The significance of that responsibility could be seen in their faces, whether any one member of the quartet, including Smith, played alone or in relation to another player.
In particular, Lindberg held forth on a pizzicato solo where the tightness of the strings invalidated the idea of resonance. On the other hand, when he activated the pedal to give the bass breadth and depth, towards the beginning and at the end of the concert, the bass became another instrument, evoking another realm of sound which enveloped the atmosphere with a wealth of fullness.  As did Aklaff, with a smack on the tom, enter into a rhythmic vein which rarely disappeared, only rose and fell in volume and complexity as the composition demanded. Sanchez's cultivation of how the piano moves through the music both sparkled and was grounded, inseparable from the collaboration that was taking place.
In just one set allowed the quartet, there were two brief breaks in the music, when the audience had no idea what to do. Had it not been for Smith's removing his horn from his mouth, looking out from the music into the space before him and raising his arms as if to say "there it is," the audience would not have responded with applause.

The last piece spoke as if to paint a portrait of hope. In a solo, Smith's trumpet created waves that washed on a sandy shore. The sun rose at dawn. And the power of triumph at that one metaphorical instance blossomed. The emotion evoked was intense as Smith moved the valves on the trumpet quickly, effortlessly, moving from the decorative flair of a trill, to a gripping melodic structure. His trumpet sound vibrated with reverence to his history and the history of his people.
Some of the unanswered questions that arise within that history were posed throughout the music. One could sense them. One could sense drive, intention, thriving, striving and woundedness as the vitality and temperament of the notes transformed. 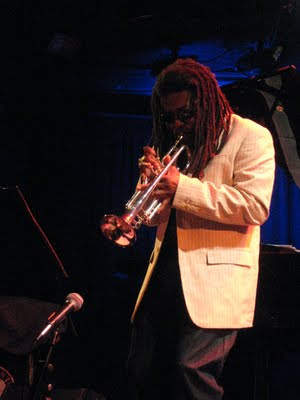 Donning a jacket that acquired a golden tone due to the way in which the stage lights were cast upon him, Smith played as if to pierce the air with dedication, dedication not only to the composition of his music but also to its capacity to communicate. A testimony to engaging the hearts and minds of those who care to listen and, most of all, learn.